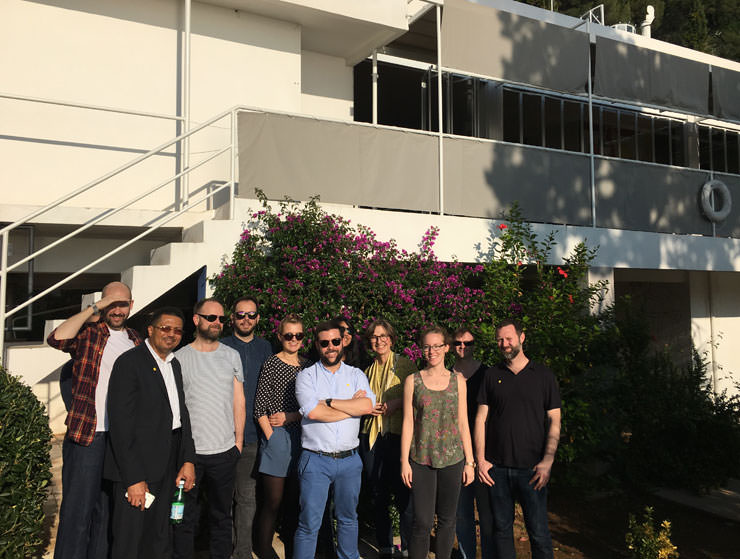 Visitors are instructed to 'Entrez Lentement' (enter slowly) by a stencilled command on the entrance hall wall. This long-awaited experience is really not something anyone is going to want to rush. The entire staff of Aram Designs were recently treated to a day-trip down to the Cap Moderne Project in the south of France to visit the newly restored, and now finally open to the public, Villa E1027. The pioneering Modernist house designed by Eileen Gray with Jean Badovici was constructed in the Riviera town of Roquebrune-Cap-Martin in 1926–29. But it’s not only Gray’s villa, with its chequered history involving Nazi soldiers, squatters and even murder (!) that is now drawing attention to this little plot on the Cote d'Azur. It is supplemented by another quirky and fascinating little gem in the form of Le Corbusier's minimalist wooden retreat, 'Le Cabanon', making it a bucket-list visit for anyone with an interest in historical architecture. 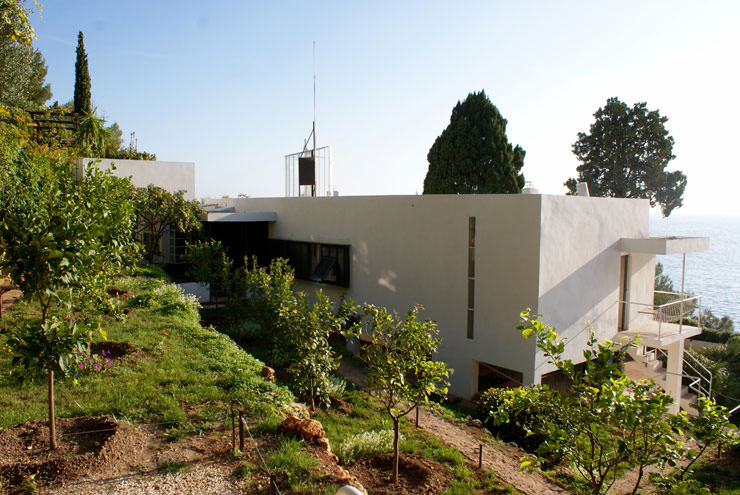 A long, winding pathway takes you away from the town and down to the coastal site. Even though housing developments have sprung up in the vicinity over the years, there is still an intimate and isolated feeling once through the gate and down into the front garden of the villa. As explained to us by our tour guide (a descendant from the family that originally owned the plot of land where the villa is sited), the landscape was once formed of terraces that filtered down to the coast. They were predominantly filled with lemon trees, a fragrant cluster of which still greet you. The weather on the day we visited was unexpectedly glorious for the time of year so with the sun glinting off the Bay of Roquebrune, it suddenly became an all-sensory experience. 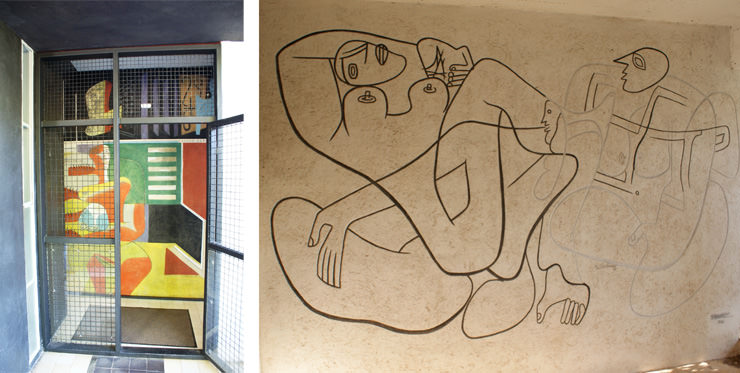 Le Corbusier's murals - left, in the entrance hall and right, in the undercroft

Once inside the entrance hall, you are greeted by one of Le Corbusier's "acts of vandalism", as they were once described by a furious Gray. This is one of a series of restored Picasso-esque, figurative frescos that he, as photos attest, nakedly painted on the white interior walls after being given free-reign to do so by Badovici following the latter’s romantic split with Gray. German soldiers who occupied the villa for a time amid the Second World War were clearly not fans of his handiwork either and used one of his murals for target practice. 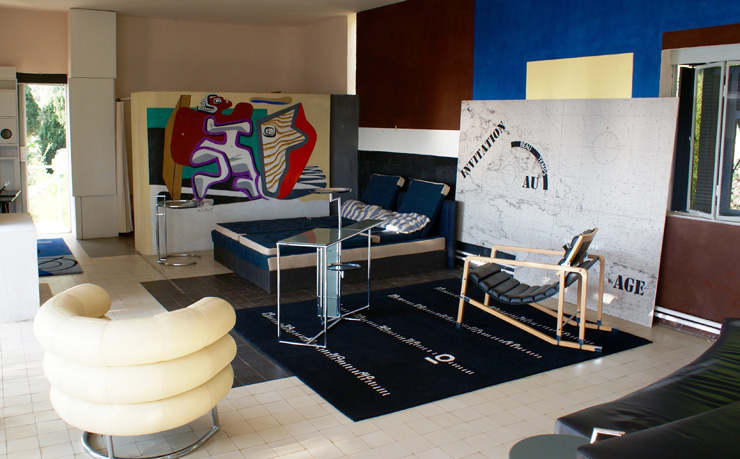 The main salon then appears behind a walled screen and reveals that interior, the one we’ve all seen in black and white photographs but which has now been carefully restituted and brought back to life along with a selection of her iconic pieces of furniture.* Wonderfully clever, concealed storage compartments can be discovered everywhere you look and bi-folding glass doors separate the salon from the balcony. These can be opened completely bringing the outside in, a recent trend with which Gray was experimenting nearly 90 years ago. 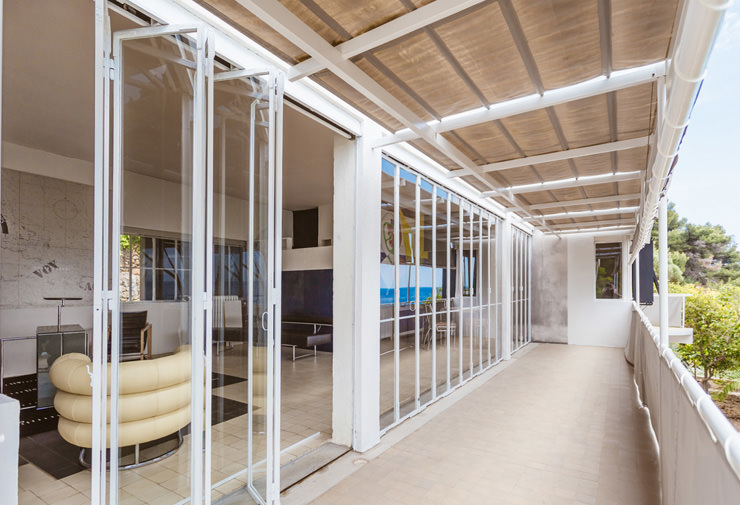 After staying there for a time in 1938, Le Corbusier wrote a letter to Gray: "Those few days spent in your house have made me appreciate the rare spirit that dictates all of its organization, both inside and outside, and has given the modern furniture and equipment a form that is so dignified, so charming and full of wit." It’s been said that Le Corbusier became obsessed, even haunted, by Gray's villa which is quite possibly why he chose to deface the building and assume some kind of artistic ownership with these murals that completely went against Gray's monochromatic aesthetic. 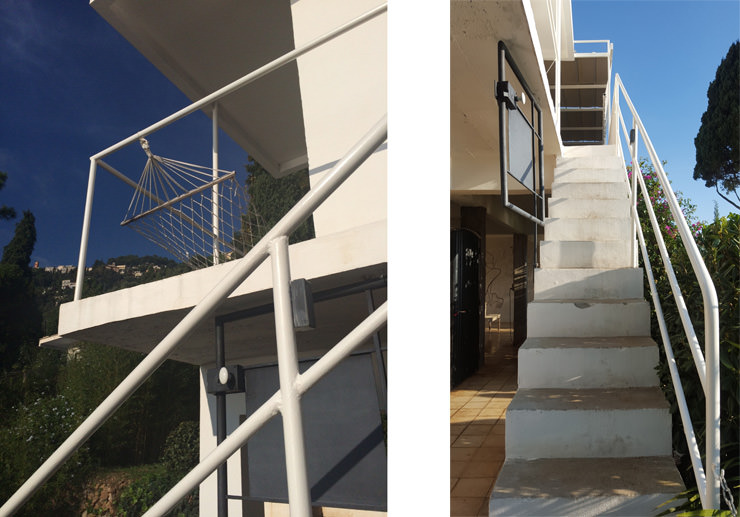 Badovici passed away in 1956 and Le Corbusier, for fear of losing access to his murals, convinced a wealthy Swiss aristocrat friend, Marie-Louise Schelbert, to purchase the villa. This proved to be a bad idea as Schelbert was in fact no fan of the villa, or its contents, and eventually turned it over to her morphine addicted doctor who then let it fall into disrepair and was eventually found murdered there.  Once abandoned, the villa was squatted in from time to time and fell into serious decline not only from abuse but also the coastal environment.  Thankfully, in 1999, the Conservatoire du Littoral took control of the villa and began the long yet sluggish (lots of hand-wringing and red tape to be unravelled) restoration process. 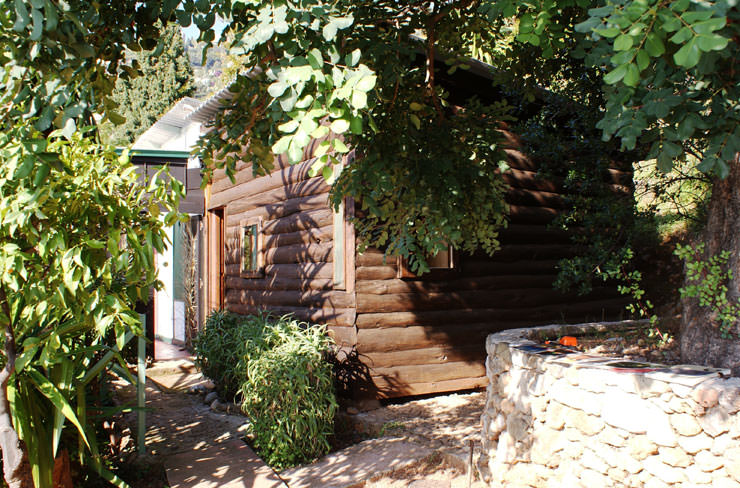 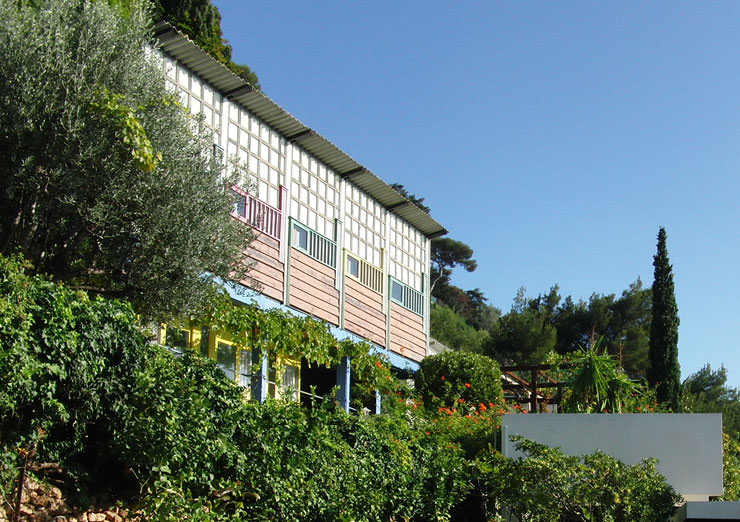 Le Corbusier's 'Cabanon', the design of which he apparently sketched in 45 minutes, is literally perched on the shoulder of the villa. It is also neighboured with (conjoined, even, with a secret door he had installed so he could come and go as he pleased) l'Etoile de Mer bar, restaurant and holiday home which Thomas Rebutato, a former handyman from Nice, built in 1949.  The cabin appeared in 1952 after Rebutato, who owned the land, allowed him to build there in exchange for him designing a row of five holiday huts - Les Unités de Camping, a terraced riff on his Cabanon design, that were eventually built just behind and above E1027 in 1956.  The Cabanon is tiny, barely enough room to swing an E1027 table, but that was the point.  Based on a ship’s cabin, it was an experiment in minimal habitation so not an inch of space is wasted with certain fixtures and fittings collaborated on with Charlotte Perriand and Jean Prouvé. 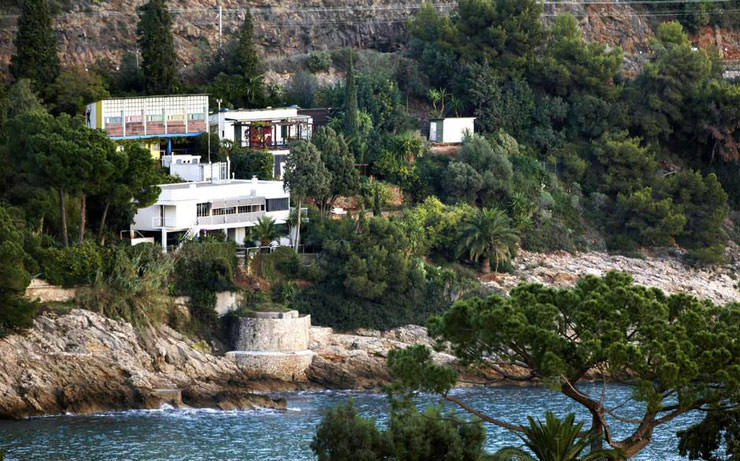 Le Corbusier was once quoted as saying "how nice it would be to die swimming toward the sun" and in August 1965, whilst taking his regular morning dip in the Med, he suffered a fatal heart attack and his body was found washed ashore just below Eileen Gray’s former home.  It is conceivable that this building which had haunted him for so long was the last thing he ever saw. 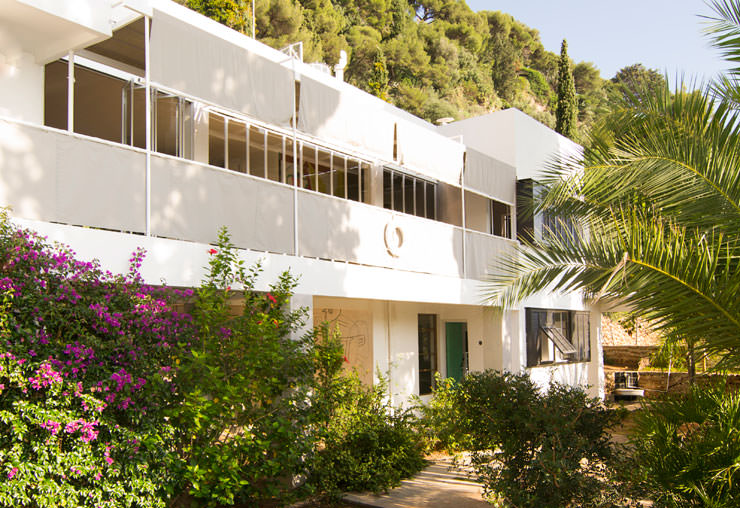 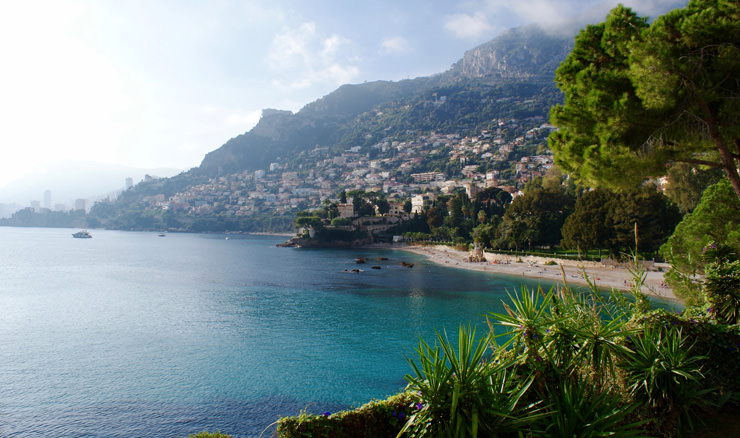 In E1027 when standing on the rear balcony or rather, deck, considering its intended nautical aesthetic with handrails lashed with tarps and even a lifebuoy crest, it's really not hard to see why Gray staked out the area for months and chose this particular spot on the coast to build her retreat as the view across to the Port of Monaco is simply breath-taking. The villa and surrounds were fascinating places to visit and evoked quite a strange feeling, to be present in the house that Gray once built and lived in.

*All the Modernist furniture by Eileen Gray which is on display in Villa E1027 was donated to the restoration project by Aram Designs.