The Vintage Collection is a selection of important products built up by Zeev Aram over the years since Aram Designs was founded in 1964.

Zeev Aram OBE opened his first store on the Kings Road in 1964 introducing modern design to the UK. Furniture by designers such as Marcel Breuer, Achille Castiglioni, Le Corbusier and Mies van der Rohe created quite an impact when seen for the first time by people more used to traditional styles.

Since then Aram has collected furniture and art which spans genres and disciplines, from early wooden bentwood designs to Pop Art sculpture.

Today part of the collection is becoming available for sale. A selection of pieces will be shown and then as they sell, others will replace them until the selected stock is exhausted. These pieces will be available to purchase online or in store from Wednesday 20 November 2019. Unless otherwise stated, there is only one of each item.

Top image - far left: 225P chair by Thonet (Germany) designed in the early 1900s, purchased in 1984; originally called the 81 chair, this series was launched in 1983. The stamp 'THONET84' on the underside of the seat indicates the year of production. Centre left: Giro rotating armchair designed by Achille and Pier Giacomo Castiglioni and made by Gavina (Italy) in 1963, purchased in 1964. Centre right: MR chair with arms designed by Ludwig Mies van der Rohe in 1927 and made by Bigla (Switzerland), purchased in 1973; tubular chromed steel cantilever frame with woven natural rattan. Far right: DAF chair designed by George Nelson in 1956-58 and made by Herman Miller (USA), purchased in 1964; off-white fibreglass shell with polished aluminium tubular legs. 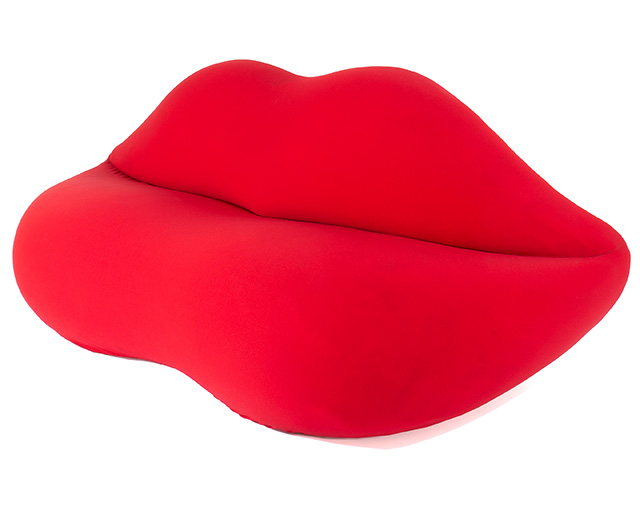 Getting their inspiration from the 1935 Portrait of Mae West by surreal artist Dalì, as well as from the hot red lips of Hollywood stars, Studio 65 architects achieved a masterpiece destined to become an object of cult. Bocca is among the most sought-after, loved, and imitated pieces of pop art sculpture. Designed in 1970 and made by Gufram (Italy), purchased in 1973.

Left: Roberto Sebastian Matta designed this chair as a tribute to his friend and fellow surrealist painter René Magritte. The apple and black bowler hat are two of Magritte’s trademarks, derived from his 1946 self-portrait The Son of Man. In the painting, Magritte shows himself wearing a black suit, bowler hat and red necktie. The surrealist aspect is a green apple floating mid-air which hides his face. Matta playfully adapted the painting by creating a fiberglass bowler hat, set upside-down, with a green foam apple inside it. When sat on, the foam of the apple would have compressed into the hat. The name MAgriTTA is a combination of the names Magritte and Matta. Designed in 1970 and made by Simon Gavina (Italy), purchased in 1971. Right: Le Temoin designed by Man Ray in 1970, purchased in 1972. The visionary Dino Gavina founded his firm Simon in 1968. His objective was to produce the innovative furniture designs of contemporary designers in an industrially manufactured series. SIMON became well-known through its three editions; Ultrarazionale (1968), Ultramobile (1971) and Metamobile (1974). The Ultramobile-Collection contained several surreal pieces of furniture with a strong symbolic presence and paid homage to artists such as René Magritte, Constantin Brancusi, Man Ray, Roberto Sebastian Matta and Meret Oppenheim. 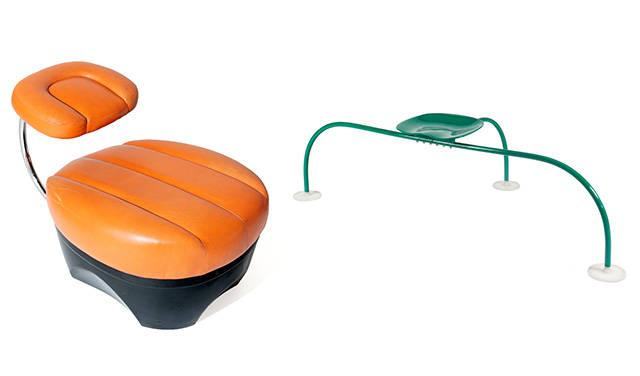 Left: The chair was designed after observing the way people in the East sit with an erect torso and without a backrest: in effect, sitting and kneeling at the same time. Primate is a playful and useful seating compromise for Western travellers. It enables respectful guests at Japanese formal dinners to sit with their hosts in the appropriate position, which would otherwise be very painful for unpractised knees. A rigid black shock-proof polystyrene base and an 18/8 stainless steel leg support the seat. The padded parts are in flexible polyurethane upholstered with leather or imitation leather. The chair or kneeling-stool is also in the Vitra Design Museum, Weil am Rhein and in the permanent collection at MOMA. Right: This outdoor seat celebrates on of the most important events in the conquest of space: the exploration of the Moon, the Earth’s only satellite, by means of probes. Allunaggio, 'moon-landing', is composed of three slender legs, curved steel tubes (22 mm diameter) supporting a pressed metal seat enamelled grass green; the weight is evenly distributed on the ground by means of three elastic, natural coloured, disks. Allunaggio designed by Achille and Pier Giacomo Castiglioni in 1965 and purchased in 1969; Primate designed by Achille Castiglioni in 1970, purchased in 1972. Both made by Zanotta (Italy). 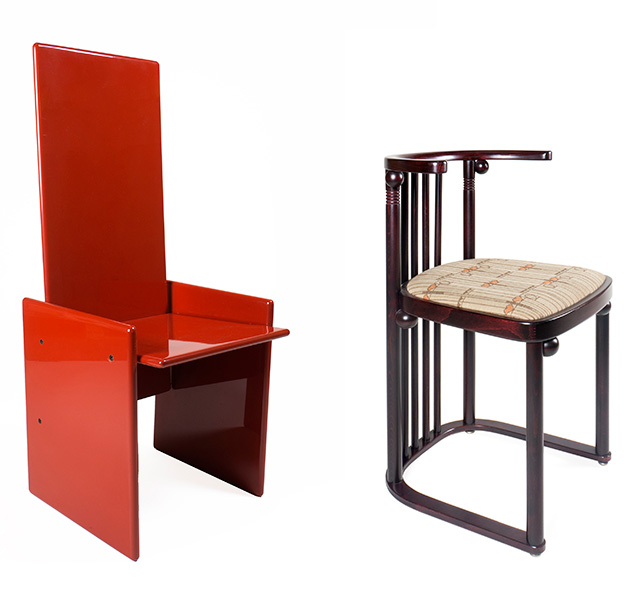 Left: Kazuki chair designed by Kazukide Takahama in 1968 and made by Gavina (Italy), purchased in 1969. Influenced by the Japanese tradition, Kazuhide Takahama lacquered the surfaces of his chair. Simon Gavina International was the first manufacturer to exploit this technique within the modern industrial process. There are two of these chairs, polyester lacquered in chinese red. Right: Fledermaus chair designed by Josef Hoffmann in 1907, made by Wittmann & Co (Austria), purchased in 1975. Designed for the Fledermaus cabaret in Vienna at the Wiener Werstätte,the exclusive Viennese workshops co-founded by Hoffmann in 1903. Inspired by the Guild of Handicraft the English architect and designer C.R. Ashbee had set up in London, the workshops wanted to create good, simple design and new modern forms. The cabaret was conceived as a meeting place for the Viennese avant-garde and welcomed people like the Viennese interdisciplinary artist Oskar Kokoschka (1886–1980). 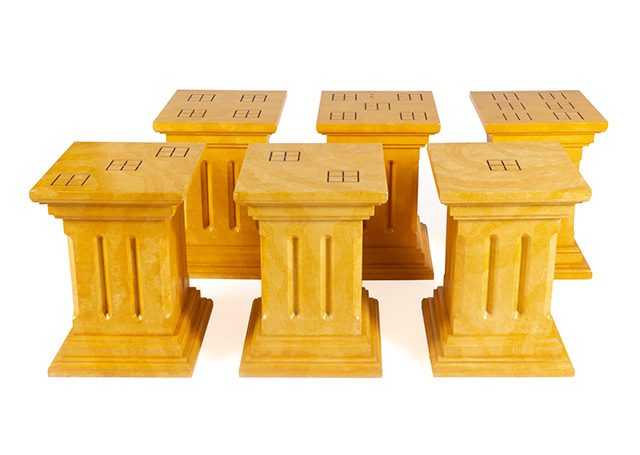 Set of six Dice side tables or stools, designed and made by the architect Charles Jencks (UK) in 1985. Shown at Symbolic Furniture exhibition at Aram Designs, 1-22 November 1985. Experimental and transitional postmodern furniture designed for Jencks' Holland Park, London house. Described by the Jencks, the godfather of postmodernism, as "having a multivalence lacking in the techno-solipsistic furniture of our time." The six triglyphs form a group that can be used as a large table or individually as seats. The proportions are the same as the Parthenon triglyphs. Charles Jencks passed away on 13 October 2019. 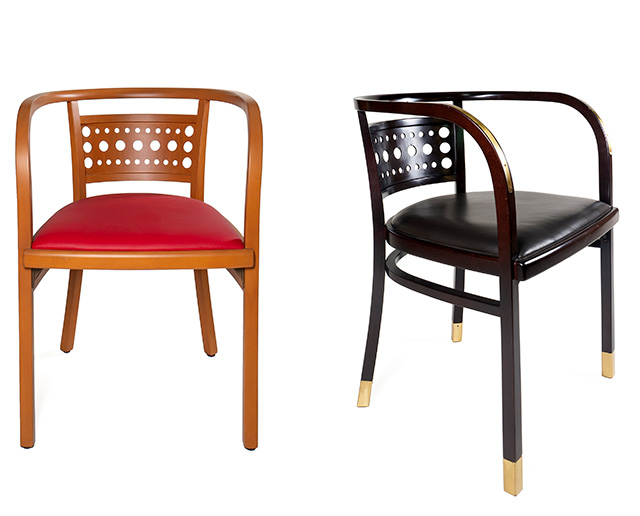 247 'Postparkassa' chairs designed by Otto Wagner in 1906. Designed for the Wiener Postsparkassa (Viennese postal savings bank). Otto Wagner designed everything associated with the new bank from buildings to interiors furniture, furnishings and fittings. Both chairs made by Thonet in 2002 (left) and 1982 (right). 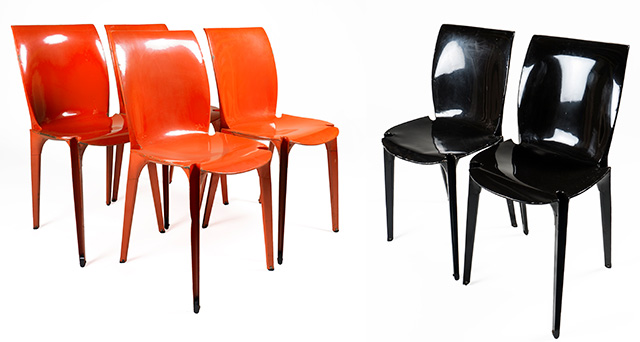 Lambda chairs designed by Marco Zanusso and Richard Sapper in 1959 and made by Gavina (Italy), purchased in 1968. Lambda was originally intended as a prototype for the car industry. It was quickly noticed by Dino Gavina, who produced it as a home furnishing in 1962. Folded enamelled metal, four in red, two in black, two in white. 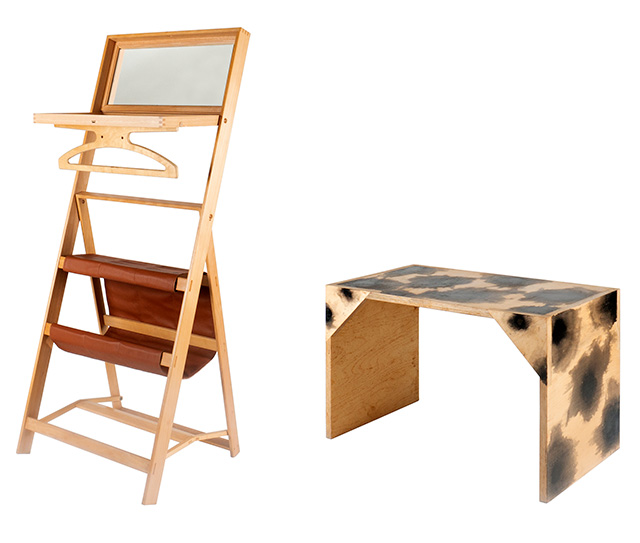 Left: Weekend wardrobe designed by Lord Snowden in 1987. Produced for Zeev Aram's AD23 Collection. "You bring it out for guests, then when you are gone you just fold it up, and put it out of the way behind a cupboard. It's something that Snowdon designed ages ago for himself." - Zeev Aram, 'The Aram Collection', Blueprint, April 1987. "I wanted to make the cheapest possible weekend wardrobe that was easily stowable and portable." - Lord Snowdon. Right: Howard Hodgkin side table, 1984. "I wanted to make a strong little table you could stand on to mend something around the house, and use the way plywood absorbs ink spills" - Howard Hodgkin, 'Artisans', The Sunday Times Magazine, 12 April 1987 Howard Hodgkin designed the tables as part of a 1984 exhibition at the Arts Council of Great Britain entitled 'Four Rooms'. Following this Hodgkin made six tables for Zeev Aram. Two of these were auctioned by Christie's in 2018. There are two available in this collection.