Massimo Vignelli and the Stendig Calendar

I know that statement sounds a little like the title of a fantasy novel but it does in fact describe a cultural institution that has been annually coveted by the design conscious for almost 50 years. 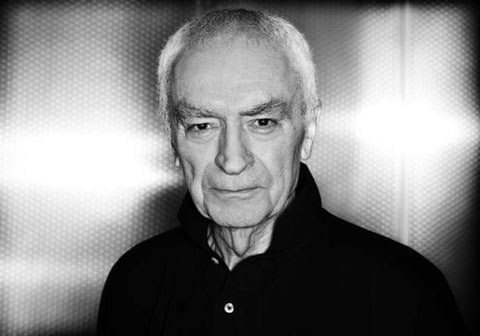 The Milanese graphic and product designer, Massimo Vignelli, designed the Stendig Calendar after receiving a commission from its namesake, Charles Stendig, the furniture dealer and importer, who shared a building in New York with the Unimark International design company who Vignelli worked for in the early 60’s. Stendig asked Vignelli to design him a calendar that could be used as a promotional gift he could give to architects and designers and the original version of the calendar was branded with the Stendig logo opposite an alternating image, throughout the months, from the ranges of furniture that Stendig was importing into the States at that time. The design of the calendar we sell today was realised in 1966 by Vignelli and so significant was its impact that it was taken into MoMA’s Collection that year. 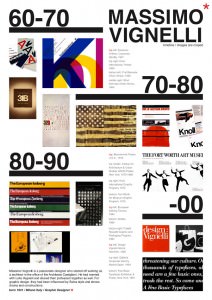 Vignelli described himself as an “information architect” and was credited for introducing a European Modernist point of view to American graphic design which was made clear by the more high-profile commissions he began to receive throughout the ‘70s. American Airlines, IBM, Ford, Xerox; all these companies were employing his expertise whilst people shopping at Bloomingdales, Barneys or Saks Fifth Avenue would be leaving these stores with a Vignelli-designed shopping bag in their hands. He was also responsible for creating a whole new graphic identity for Knoll International in the late ‘60s as well as contributing two furniture designs for them: the Handkerchief Chair (collaboratively with David Law) and the Paperclip Table.

His largest yet most controversial commission came in 1972 when he was approached by the Metropolitan Transit Authority and asked to re-design the New York City Subway map.  But, upon its release, the map was not received favourably by subway riders because it didn’t correspond, geographically, with the streets and locations of the stations above.  By graphically simplifying the actual snarling routes of the subterranean lines into straight, coloured columns that ran north to south, east to west and landmarks into blocks of colours (Central Park was represented by a grey square), he somehow managed to baffle the ‘strap-hangers’ so much that complaints were made and the MTA were forced to replace it in 1979.  However, 40 years on, Vignelli’s original NYC subway map is considered a thing of beauty by design aficionados and is hanging on the wall at MoMA.  War won, aesthetically.

But back to the Stendig Calendar and a little insight into its enduring appeal which, fundamentally, is due to its simplicity. The size (90cm x 120cm) and bold, black and white Helvetica font make it dramatic in appearance yet its timeless design fits perfectly within any environment be it the office or home; modern or vintage.  It’s presented in the European style, where Monday starts the week, and is printed on twelve sheets of sixty pound weight offset paper stock which is perforated along the top edge so last month can simply be torn away.  And, for those inclined, it even has a recyclable aspect to it whereby the redundant sheets can be kept and used for gift wrap. 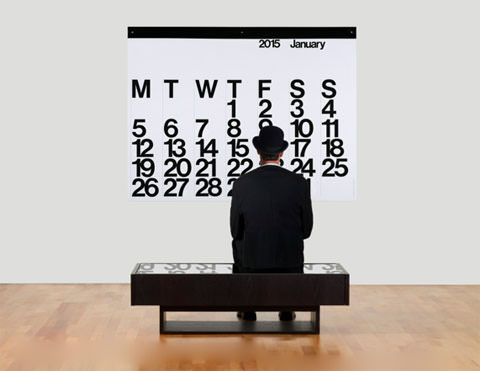 For real clarity on the inspiration and thinking behind Vignelli’s design for the Stendig Calendar, his own mission statement says it all:

I like design to be semantically correct, syntactically consistent, and pragmatically understandable. I like it to be visually powerful, intellectually elegant, and above all timeless.

Our stock of the 2016 Calendar has just arrived so don’t miss out because we always sell out quickly!