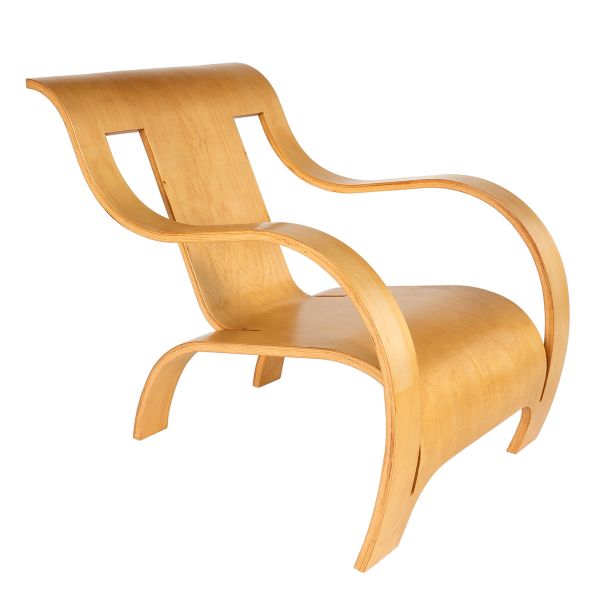 Skip to the beginning of the images gallery
Description
Designed by Gerald Summers in 1933-34, purchased in 1998 from SCP. Gerald Summers was the most innovative British Modernist designer and in only ten years produced over a hundred furniture designs which capture the zeitgeist of the 1930's. He achieved with this Modernist masterpiece what his counterparts across Europe and Scandinavia had been striving for as it describes in the simplest terms the ideal unity of material, production, function and form.
Specifications

The Bent Plywood Arm Chair is made from a single rectangle of ply; the seven 3 mm thick sheets with four lengthwise and 2 lateral cuts were placed on top of each other, sandwiched with the adhesive used in the aviation industry and laid in the mould. After only eight hours the chair was removed and required minimal finishing. The design is ingenious because not only are all the component parts constructed from a single piece of bent plywood giving the design its distinctive visual appeal but also because the chair was the first to be formed in a mould. are now held by the Victoria & Albert Museum in London, the Museum of Modern Art, New York and the Vitra Design Museum in Germany.

For further information or support, please call us in store on 020 7557 7557, alternatively please email us at [email protected]